Today’s episode of Selling in Color, an archive from The Sales Evangelist, features DeJuan Brown. Dejuan, like 40% of salespeople, did not plan to join the sales profession. In fact, his initial dream job was to be a chemist. And in today’s episode, you’ll find out how DeJuan fell into sales.

DeJuan realized chemistry wasn’t for him.

He had a mixed perception of salespeople.

But DeJuan had a change of heart.

DeJuan started to see the success he wanted.

SIC 039: Donald Kelly – How to Get A Personal Communication Line With Prospects ASAP

What principles do Donald and his team live by to yield a 90-95% show-up rate to appointments with his prospects and clients? (Here’s a hint: it’s all about establishing a personal communication line!) Find out on today’s episode of Selling Color.  Establish a... 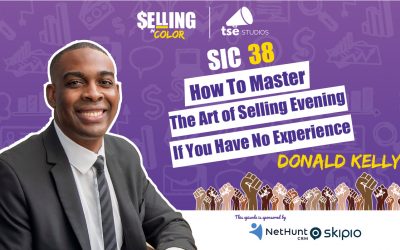 There’s a longstanding sales debate: is sales an art or a science? In Donald’s opinion, it’s actually a little of both! Striking a balance between understanding sales as an art form and as a science is the key to generating sales, whether or not you have experience!...

SIC 037: Billy Keels -The Most Important Things To Look For When Hiring Successful Sellers

As you’re looking to get your next (or even first) sales job, understanding what traits help you stand out can be a challenge. But on today’s episode of Selling in Color, we’re looking back to an episode from the vault of The Sales Evangelist (featuring Billy Keels.)...